Well there has been no news on the blog of late as I've been away from the windowsill with work. And what a time to go away! A few days in to my trip I had an email from the guy that lives downstairs saying that our troughs were in his front garden. Oh dear... the weather has been so awful in London that the wind had picked up the two troughs on the living room windowsills and deposited them in the garden. Thank goodness they were only plastic ones and not terracotta! 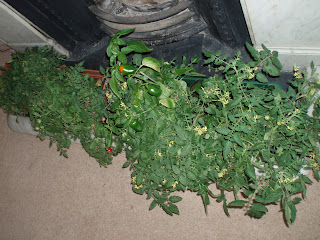 The damage doesn't seem too bad anyway, we lost quite a few green tomatoes and one of the sweet peppers (which is starting to turn red as well!) has split but asides from that they don't seem to be too bad which is lucky. They've had a few days to recouperate back in the fireplace but I think we'll need to pluck up the courage to put them back out on the windowsill soon or otherwise they'll start growing in that crazy way like they did before in the fireplace.

There was some damage to the chilli plant in the trough on the kitchen windowsill which didn't tumble in to the garden too and the plant snapped right in half so has had to be chopped right back unfortunately. Fingers crossed the worst of the weather is now behind us!
Posted by Amy at 16:32