The last of the red tomatoes... 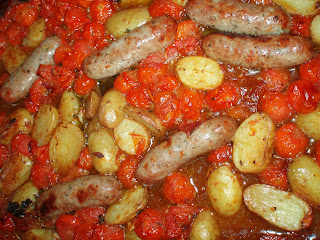 I decided to use up the last of the red tomatoes yesterday in a Jamie Oliver sausage and tomato bake for a hearty late lunch. This is an old favourite of ours but to make it into a one-pot wonder we add Charlotte potatoes that have just been sliced in half into the mix. It's so easy - you just throw it all into the roasting tin, whack it in the oven and give it a stir a few times and out comes a delicious meal! Yesterday I also added in a few sprigs of our fresh windowsill oregano too. And the best thing is, we had quite a bit of the gorgeous tomatoey, balsamicy sauce left over which is going to go great with some penne for today's lunch, finished off with some gratings of parmesan and more fresh oregano leaves over the top.
Posted by Amy at 13:04 2 comments:

Now that the fruits of my labour over the summer are on their way out I have been wondering whether there is anything that I can put into my windowboxes over the winter months so that I've still got something exciting going on and I'm not just staring at bare earth with a few scrappy plants for several months. From an initial Google I was rather disappointed as it seemed very much that I'd missed the boat and should have been thinking about this a long while back in August. However, then I found this great page on the Garden Organic website which shows that October is a fine month to be planting a whole range of things - garlic, autumn set onions, chinese leaves, lambs lettuce, winter lettuce and more... I was watching an episode of the City Gardener the other day on 4oD where they were putting garlic and onion sets into pots for the patio so I'm fairly confident that I should be able to grow them in pots on the windowsill but of the leafy suggestions, not having an idea of size, I can't work out which might be ok for the windowsill.

Food from the sky 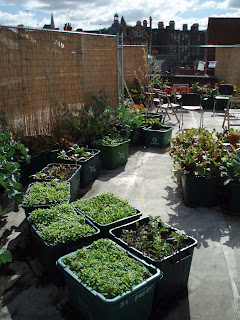 Well a few weeks ago I promised to report back from a garden that I visited on the Capital Growth Open Gardens day when garden's across London opened their doors to the public. Keeping in the vain of my windowsill garden I decided to visit another aerial garden called "Food from the Sky" which is on the roof of Budgen's supermarket in Crouch End in North London.

I found it a fabulously inspiring visit with old recycling boxes carefully placed around the roof that had all manner of exciting vegetables growing in them from salad leaves, tomatoes and peppers right through to fruit trees and there were some flowers thrown in for good measure as well along with egg boxes dotted around the place that had been put to equally good recycled use as seed starter trays. Amazing! 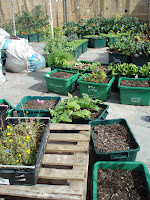 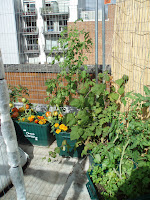 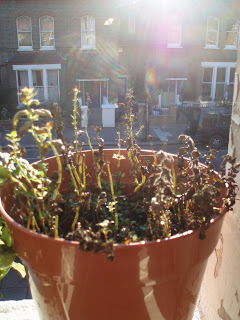 Continuing in the theme of the dying contents of our windowsill our mint was not looking at all happy. All of the branches and stems had gone woody and the leaves crinkled and brown and so there I was about to chuck it out when I had a look down into the pot and there were loads of small bright green leaves growing up from the base of the pot. 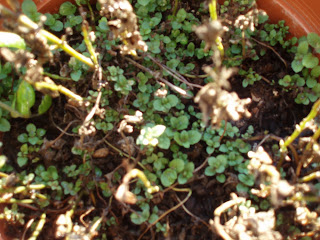 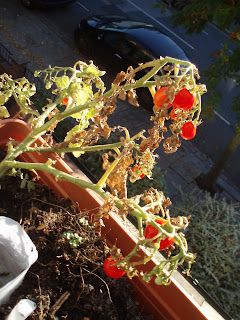 As a novice gardener in her first year of gardening I was becoming a bit disillusioned - the excitement of the spring and summer when new things seemed to be happening every day had passed and the plants just seemed to be on a slow decline to death. I'd been walking past them and rather than getting the joy of earlier months I was getting a sinking feeling as they just started to look more and more dead every day. 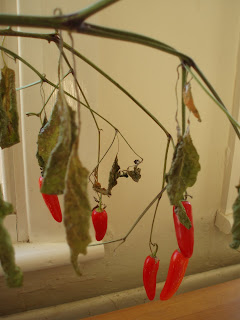 But the other day I decided to pick myself up and have a proper look at them all and look for the positives - we had lots of bright red chillies and tomatoes just waiting to be picked and the oregano still seems to be coming on great guns. 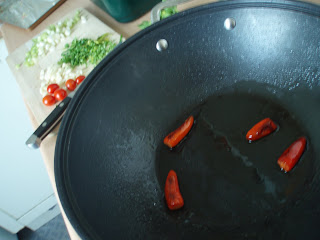 We also had no food in the house for dinner and had just got back from a trip away so the fact that we had these bright juicy fat red chillies and tomatoes just crying out to be picked was a great little present. So I heated up the hob and chucked four of the chillies in the pan to blacken them all over. Then in went the tomatoes along with some chopped spring onions, garlic and the finely chopped stalks of a bunch of parsley that I found lying around in the fridge. Meanwhile I got a big pot of boiling water on the go to cook some pasta in. Once all of the veggies had fried down a bit I bashed up the chillies, added a tin of chopped tomatoes and a tin of drained chickpeas and 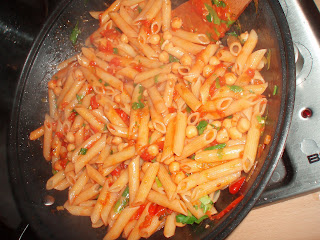 left it all to simmer away while the pasta cooked. Once the pasta was done I added a ladelful of the pasta water to the sauce, chucked the pasta in and stirred it around along with the chopped parsley leaves and salt and pepper to taste. A perfect meal inspired by the windowsill and the store cupboard!
Posted by Amy at 08:53 5 comments: