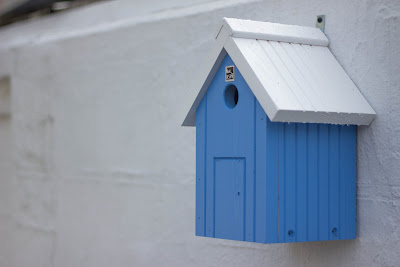 We've put a birdbox up in the garden! As the garden is quite dinky the only suitable place to put it was at the end of the wall that runs down the side passage. I'm a little concerned that it might be too close to the path and where we're coming and going but we decided to give it a go and see whether it works. Fingers crossed we get an inhabitant!
Posted by Amy at 18:49 No comments:

Well a week after being planted the tomatoes and thyme were starting to peek through. Pretty pleased that so many of the thyme seeds had germinated as I'd heard that thyme was hard to grow from seeds. Time will tell whether I manage to keep them alive and get thyme plants going from them...

So I've sowed my first seeds of 2013. This year I've been doing quite a bit of reading about gardening in general and what I should be doing when. I'm trying very hard not to get too excited about all the new found space we have and keep things relatively simple and so for this year we have decided not to do too much with the main portion of the garden and keep all of our vegetable growing within hanging baskets and pots on the patio. This should mean we're able to have a lot more growing space than we have done in previous years but will hopefully not be such a big step up that we're overwhelmed by everything we have to do and have too much to learn.

Therefore, again with the seeds for this year we've stuck with only buying ones which are recommended for containers although we have allowed ourselves some bigger crops (such as sweetcorn, courgette and squash!) than we've previously had on the windowsill. I'm also keen to get a herb garden established so we've bought a selection of herb seeds.

Last Monday I set about sowing the first set. In my reading I'd seen that it is recommended that rather than sow all of your seeds at once you sow over successive weeks to spread out your harvest better throughout the year and so taking this into account I started with just sowing a couple of each of the seeds. I still had some seeds left over from last year (aubergines, caldero chillies, a packet of Wahaca chilli seeds that I'd picked up at some point along the way) so I shoved them in some seed compost to see if they'll do anything and then I started to plant up a few of the seeds that I've bought for this year so planted some red and yellow tumbling tomatoes, chervil, rosemary and thyme. I've read that it's really hard to get rosemary and thyme to germinate so fingers crossed!

We also no longer have our lovely dining table sitting in a south facing window just perfect for germinating seeds that we had in the flat so I've resorted to using the bed in the spare room having protected the mattress with a dust sheet and put a couple of spare table tops on top of it. The window is west facing which is the best I can do so we'll see how it goes...

Not just a windowsill

So I also have some exciting news to report. Over the winter we have bought and moved into our very own house! Which means that I am no longer a three windowsill gardener and now have two (albeit pretty small) gardens to get to grips with. I've already been out a few times digging, weeding and tidying up but am looking forwards to feeling my way through my first year with a small patch of land to tend. Here's what we've got to contend with:

We did get aubergines...

Hmm... it appears again that, as in 2011, I managed to start the year with the greatest of intentions in 2012, blogging a few times and then life got in the way and I didn't manage to keep it up. We didn't give up on the windowsill though and did indeed get aubergines! In fact, the aubergines were our most successful windowsill crop last year - whilst we got some tomatoes and chillies, they didn't fare so well with the relentless rain that we had. Here's the 2012 highlights:


So here I am again, in 2013, starting the blog up again with the greatest of intentions. Fingers crossed I'll find the time to keep it going this year!
Posted by Amy at 18:25 No comments:

All our seedlings have germinated!


First the sunflowers popped their heads up, then came the red and yellow tomatoes (the yellow tomatoes seem to have done considerably better than the red ones with all of the yellow tomatoes germinating but only six of the ten red tomato seeds that I planted have germinated), a week or so later the aubergines appeared (very exciting!) and then just over the weekend the chillis have started to pop their heads up so now I have a full complement of all of the seedlings that I planted.
Posted by Amy at 08:18 2 comments: 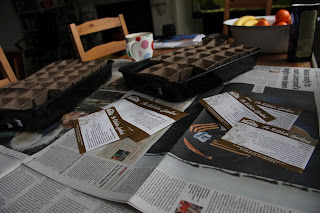 It's taken me a few days to get around to writing this post but the 2012 seeds are in! The aubergines, red and yellow tomatoes, chillies and sunflowers have all been planted into the seed trays and left on the dining table in the sun to germinate. From reading the packet it looks like you plant the runner bean seeds straight into small pots in April and so I haven't done anything with them yet. 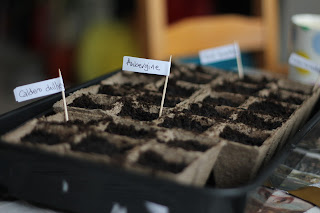 I've got my fingers and toes crossed that the aubergines come up trumps!
Posted by Amy at 19:16 1 comment: