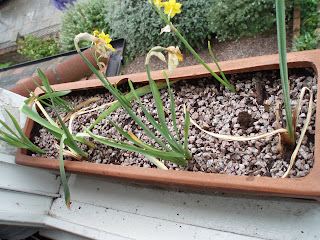 The torrential rain of the last couple of days has finished off the last of our windowbox daffodils. Over the past few weeks we've had some gorgeous narcissi with multiple yellow flowers coming from one stem but now their time has passed. Unfortunately it would also seem that the wildflower seeds that I planted in the pot a month or so ago have failed to germinate (I think that the seeds were just too old) so I am left with a windowbox without flowers. I have been reading about what to do with daffodils once they've died and learnt that you should leave them for 6-8 weeks after they have died to allow the nutrients to return to the bulbs and so I need to think of something to do in the meantime. I thought that given my failure at attempting to grow salad leaves in a seed tray that planting some salad leaves in and around the dead daffodils might be an idea and then once the daffodils have gone it can become a fully fledged salads windowbox. 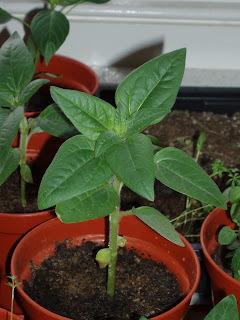 In other flower news and in light of international sunflower guerilla gardening day on Saturday our five sunflowers are looking healthy and strong.

I think that all of our plants are starting to outgrow the small pots that they are in now and have been advised that in London the frosts pass quicker than in other parts of the country and so will be starting to think about potting them on in the not too distant.
Posted by Amy at 10:58