Today there has been a flurry of activity on the windowsill involving some of the plants actually moving temporarily off the windowsill. Over the past couple of days I have been trying to plan out where things are going to go now that I know what plants I've got that have grown and we're going to have the three windowboxes outside and another two inside that have got special trays in them that stop the water leaking out the bottom. 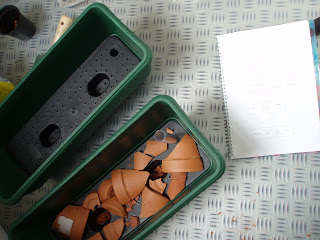 I've been getting a little worried that some of the tomato plants are getting a bit too big for their little pots and so today I planted up the two troughs that are going to remain inside (as I haven't got around to hardening off any of the plants yet). It's amazing how much compost you need just to fill up two troughs and I had to pop out to pick up some more half way through.

Anyways, at the end of the days planting I've got one trough with a sweet pepper in the middle and a tomato plant at either end and the other ones got a chilli pepper in the middle and tomatoes at the end. I also thought that I'd have a go at putting some of the oregano around the base of one of them and so split two of my pots of oregano up and planted them in four patches at the bottom. I hadn't quite anticipated how tricky it would be to split the root balls of the little oregano plants though so they all fell apart a bit and I've got a feeling that the roots of some ended up with the shoots of others... so we'll wait to see whether their transplantation ends a success or not. 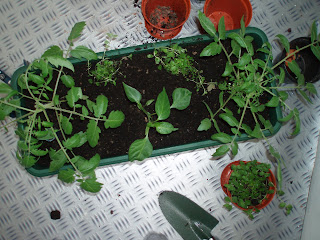 In other exciting news the sweet pepper plant has now got buds on it and all of the sunflowers are developing little buds. 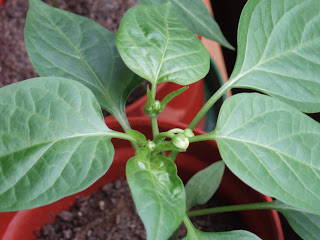 The only down side of planting everything out is that until I get around to hardening off the other plants so that they are able to go outside the troughs have now taken over the kitchen as well as the table! 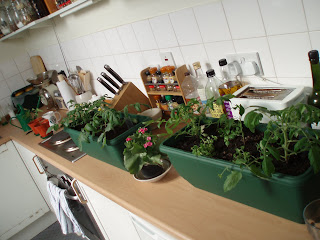 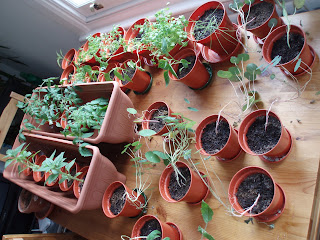