The trials and errors of a first time gardener... 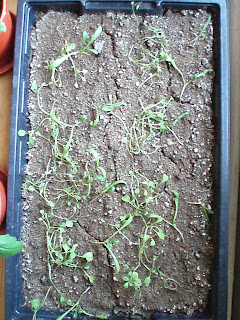 I knew it was all too good to be true. I didn't know what I was doing, I planted a whole load of seeds and they grew! Surely such luck could not last. And so the first of my gardening failures are springing up (or wilting down more to the point). I was convinced after reading a few articles on growing salads and then reading Elevated Agriculture's very comprehensive guide to planting windowsill lettuces that the seed trays I had tried to start off some early rocket and spinach in would be too shallow and so, 3 weeks after planting the spinach and 5 after planting the rocket they have completely wilted up and keeled over. It all happened quite quickly too - in the space of a few days they went from being healthy looking little plants to being shrivelled and dead. Still... in our trip to the garden centre last weekend we bought our deeper pots for the window ledges so once we pot them up hopefully we can get some salad leaves going in them. 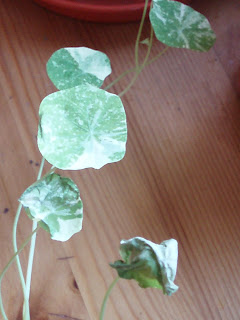 And our once strong nasturtiums also seem to have taken a turn for the worse. Most of them are still looking ok but a couple of them are starting to get shrivelled leaves. Could this be a sign that they have outgrown the pots that they're in? This specimen has been the only one to have stripy leaves the whole time so I thought that it was just a colour variation but now I'm wondering whether it has been slightly sickly all along. Also having heard that often nasturtium seeds are planted straight in the ground in May I'm thinking that starting them off in pots might not have been the best idea for them after all.

It wasn't the best weekend in the kitchen either. I attempted to make fudge for the first time and somehow ended up with a very sticky toffee instead which unfortunately couldn't be salvaged and ended up in a ball in the bin. It was supposed to be for a present, I had brought all lovely ribbon and organza to wrap up little parcels of sweets in although luckily I'd had the foresight to plan a few different parcels and the coconut ice and shortbread recipes worked much better so all was not lost!

And as they say - the best lesson is to learn from your mistakes!
Posted by Amy at 21:20