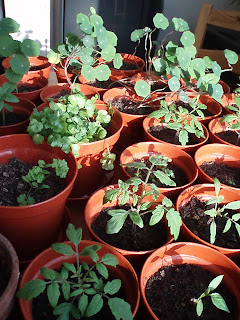 Well the tomatoes and the nasturtiums seem to be coming on like wildfire at the moment and the spinach has absolutely shot up since this morning.

The tomatoes and the nasturtiums have got to the stage now though when I'm wondering how long they can stay in the pots they are in. For space issues inside I'd quite like to be able to go straight from the pots they're in out to the windowboxes but is it still to cold and early for them to brave the outside? For tomatoes I have read everything from early May to late June but have also heard of some people putting their tomatoes outside from mid-April so I'm not sure what to do! Also, before fully transplanting them into outdoor windowboxes do we need to acclimatise them to outside a bit at a time or will they be ok if they go straight out? From a 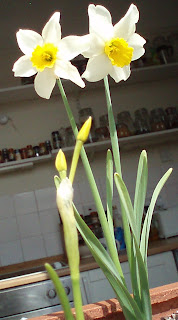 bit of nasturtium research it seems that they would probably be ok to go outside straight away (and they are getting a little unruly on the table!) but would it be ok plant them in a window box now that we then add more to later?

Outside on the kitchen windowsill the last of our three types of daffodil is looking like it will burst into flower any day. And these ones will have multiple flowers from one stem which I'm looking forward to seeing.
Posted by Amy at 20:07