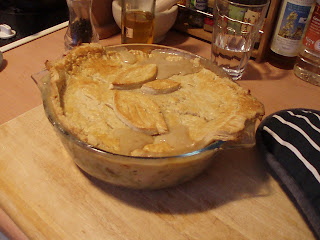 It has been pointed out to me that the blog has become a bit more of the windowsill and a bit less of the cook. 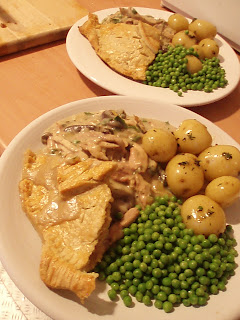 So here's a post to even things out a bit! Last night I made a chicken and mushroom pie for the first time ever and very tasty it was too. I just got the recipe from the BBC website although altered a few things using large flat mushrooms rather than button ones and using the remaining half of a roast chicken rather than three chicken breasts but it all turned out very nicely. Alongside it we had new potatoes and I dressed them following a "tip" on the side of the packet to shake them up with lemon zest, thyme leaves, olive oil, salt and pepper. Delicious!

So pie, peas and potatoes for dinner and two very satisfied customers!
Posted by Amy at 20:06