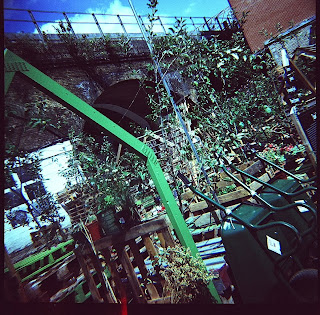 Earlier on in the summer, following a tip-off from camillap at Seeds and the City, I popped along to the South Bank to visit the Union Street Urban Orchard. It was a tiny space on a back street in Southwark next to a parking lot and the railway line which had been taken over for the summer by some enthusiastic growers as part of the London Festival of Architecture. It was overflowing with fruit trees and vegetables that were busy ripening in this unusal setting. I found it completely inspiring and hopefully made some passers by think about the unusual spaces that they might have available to them to start growing some fruit or vegetables in.

In a similar vain it's the Capital Growth Open Gardens Day today so I've been having a look at what gardens there are nestled in amongst the city. Along the windowsill lines there's a garden on the roof of Budgen's in Crouch End, North London so I thought that it would be interesting to go and check it out. I'll let you know how it goes!
Posted by Amy at 10:45