Well the chillies that managed to survive the winds are going strong still out in the occasional patches of sunshine that we've had this week but the windfall chilli met a good end too. As the chilli seeds originally came from Wahaca it seemed right that our first chilli produce should be used in a recipe from Thomasina Miers' new book Mexican Food Made Simple and so chicken and tomato enchiladas it was! 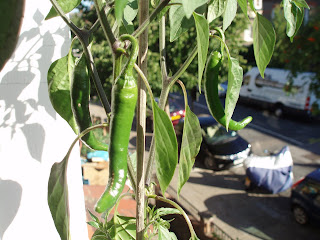 The chillies go into the smoky tomato sauce and to make that you quarter an onion, peel four garlic cloves and blacken them in a dry frying pan along with two chillies and twelve tomatoes. 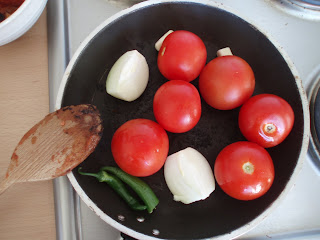 You want everything to get really blackened and the skins of the chillies and tomatoes to be bubbling and blistering. Once things are going nice and black remove 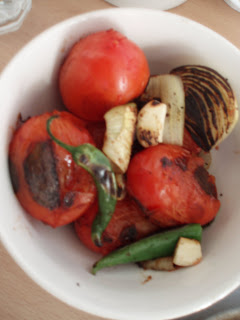 them from the frying pan. They won't all cook at the same speed so some will need removing earlier than others. Once they're all out of the frying pan, peel the skins off the chillies and tomatoes and remove the chilli stalks and then blitz the lot in a food processor to get a lovely sauce. Add to this a good glug of red wine vinegar and then place in a saucepan and allow to reduce for half an hour or so. When it has reduced nicely, add a handful of chopped tarragon and chervil along with a teaspoonful of demerera sugar and some salt and pepper. Separate your sauce into two halves. Shred the meat off half a pre-cooked chicken and stir that into one half of the sauce. 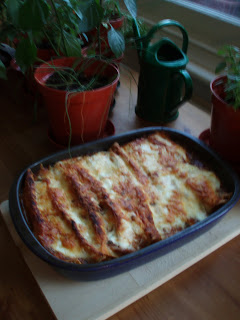 Now it's time to make up the enchiladas. Pour enough of the sauce into the bottom of an oven-proof dish to cover it. Get your corn tortillas one by one, fill them with the chicken mixture, roll them up and place them in a line in the dish as you would with canneloni. Once you've got them all snugly fitting in the dish and have used up all your filling pour the remaining tomato sauce over the top. Then cover this with a good layer of sour cream and finally top off with grated cheese. Place in a pre-heated oven on 180 degrees for 40 minutes. Sit back and relax with a glass of wine while it cooks.
Posted by Amy at 22:08