And so came the winds...

...well it was a little breezy yesterday! A little too breezy for our poor tomato and chilli plants which I had just placed outside following the removal of the decidedly dead looking windowboxes of sunflowers and salads. 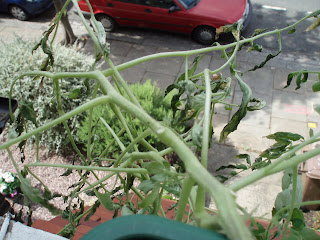 One of our windows is a bit sticky to open and so so far I've only placed one of the troughs that was in the fireplace outside but yesterday it took a bit of a battering. The long sprawling tomato plants that had been slowly creeping their way across our carpeted living room floor were tossed this way and that in the wind, causing the leaves to all shrivel up and several of the branches to snap completely. And the poor chilli plant in the middle of the trough was looking rather the worse for wear too when I got back home from work last night.

So this morning, deciding that such long sprawling plants were never going to survive out on the breezy windowsill I took the executive decision to massacre them. I have severely cut the two plants back. They look like they've got some good strong shoots on their way from out near the base so I thought that it would be better for them to concentrate their efforts on those rather than on the shrivelled snapped branches. However, I did no reading up on whether or not that was a good or bad thing to do before I did it so we'll have to wait and see if it works or not! 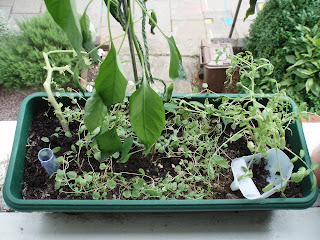 Our best cropping chilli plant also lost two of its chillies to the wind unfortunately. I found one of them lying in the pot but think that the other one must have blown away. So now we only have three chillies growing on the plant. Although amazingly this morning I have noticed that despite all odds and still being in the tiniest pot ever one of the chilli plants that we haven't even transplanted has got a chilli on the way! Incredible! 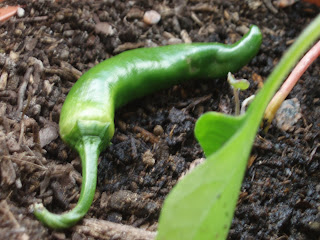