Out with the old and in with the new! 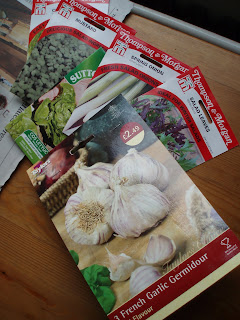 Well over the weekend I took the opportunity to do some tidying up and armed with all of your suggestions from the other week headed off to the garden centre in search of some winter windowsill produce. I managed to get hold of some garlic, winter salad leaves, sping onions and cos lettuces which all said that they were ok to be planted at this time of year and I also picked up some cress and mustard too to keep me busy.

When I got back I spent some time pottering around and cleared out one of the windowsills where all of the former tomato plants were dead (I have left a little clump of oregano which was clinging on for dear life in the hope that it is going to revive itself) and in their place I have planted a row of the winter leaves and a row of the spring onions. It didn't mention anything on the label about starting them off inside so I have just planted them straight into the windowbox outside (not sure if this was a good idea or not!?!). Then I also removed the chilli plant which had only produced one short fat chilli and have planted three cloves of garlic in its place. Am looking forward to seeing whether anything sprouts or not! 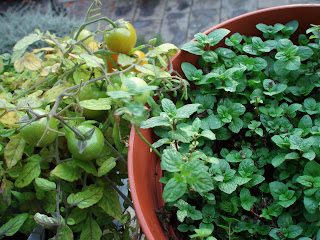 I've left the other two windowboxes for the time being - one of them is still bursting with chillies and to keep them fresh I don't want to be picking them until we need them and the other one has lots of tomatoes that are a yellowish colour at the moment so I'm clinging on in the vain hope that they might turn red for me some day soon. I've also left the pot of mint in place and tidied it up removing all of the dead stalks and it's sprung back to life amazingly!
Posted by Amy at 19:26