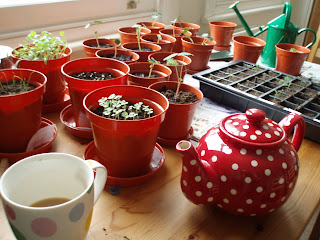 Well we've had a good stab at potting up the plants from the seed tray. I thought that it would be good to repot the nasturtiums, the stronger of the sunflowers, the oregano and the tomatoes. However, we ran out of compost about half way through. So the tomatoes and some of the oregano are still in the seed trays for the moment.

It's amazing how much space everything takes up once it's potted out though... Now about half of our dining table has been taken over with pots! I'm also a little worried that when we did the repotting we might have disturbed the roots a bit too much (the soil all fell apart rather than staying in tight plugs) but I figure that it's still early in the year and we're learning as we go so if we lose a few now we've still got time to plant more up.

We also did a little more sowing and have now got a seed tray with two lines of rocket seeds in it. Looking forward to some yummy homegrown salads very shortly!
Posted by Amy at 16:47

Email ThisBlogThis!Share to TwitterShare to FacebookShare to Pinterest
Labels: grow your own, repotting seedlings, rocket