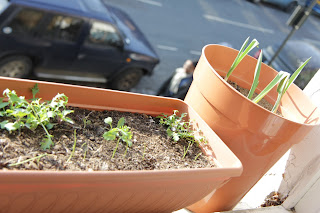 Our winter leaves were getting a bit on the large side so I decided to chop them down today and shove them in a sandwich. After I'd cut them all down I suddenly realised that they're probably supposed to be "cut and come again" so I should have just chopped off a few leaves from each plant and left them growing (is that the idea with cut and come again salad leaves??) however unfortunately by then it was too late and the deed was done! But what a fabulous sandwich it was - brown seedy bread, pickle from Fortnum and Mason's (a Christmas present), mature cheddar all topped off with a big pile of windowsill grown winter leaves. 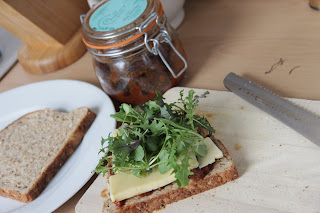 As I felt a bit guilty for having pulled up all of the little plants I then went on a planting extravaganza. So I've now liberally scattered more seeds for the mixed winter leaves throughout the front of the trough they came out of (there's the line 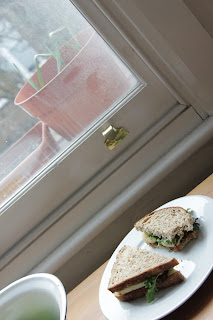 of slightly worse for wear looking spring onions along the back of the trough), on the soil around the three garlic plants which are looking really healthy and in the other round pot that had a serrano chilli in it last year. In the remaining trough that didn't have anything in it I've scattered Cos lettuce seeds - it said on the pack that they should be started out in seed trays but I had absolutely no luck with the salads I tried to grow in seed trays last year so I decided to sow them straight outside and see whether they germinate or not.

All in all an eventful day's action out on the windowsill!
Posted by Amy at 18:01