Well there's nothing quite like cooking up a leisurely breakfast to celebrate the start of the weekend and this morning was a day for using up some left over potatoes in the bottom of the vegetable bin. 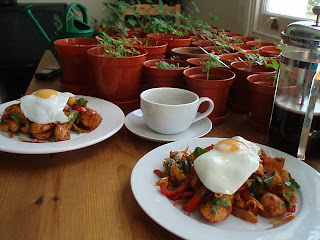 After an early morning run it was back to the flat to potter in the kitchen making up the recipe as I went along (although it rougly follows a lot of fried potato/home fries recipes).

I used all of the potatoes that we had lying around which was a mixture of new and baby new, chopped them up and part-boiled them. Then to start I slowly fried an onion over a low heat and once it was soft added a thinly sliced red pepper and some chopped garlic. Leave that all to cook together on a very low heat for quite a while until everything is soft and super-sweet. Just before adding in the potatoes I stirred through a couple of teaspoons of sweet smoked paprika (the proper Spanish stuff that you can get from Brindisa is what you need!) and a teaspoon of harissa paste. Then I mixed in the potatoes and turned up the heat. Leave it to cook for another half hour or so turning occasionally. Just before you serve it season with salt and pepper and stir through loads of fresh chopped flat leaf parsley and torn basil. Serve in a pile with a fried egg on top.
Posted by Amy at 12:56